Photos surfaced showing a “Red October” colorway for the Nike Dunk. Not just a nod to the Yeezy, but a direct imitation complete with scales and yeezy laces. Many samples never make it into production, and without a doubt the severed relationship between Kanye West and Nike could open a can of worms if these release. 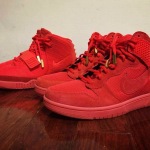 However Yeezy fans, still anticipating the delayed Adidas Yezi release, would flock to cop these should they drop. Follow us on twitter and check back for updates on a potential release date.

Source: Kix And The City