The KD VI seems to be steamrolling with colorways one after another, and hardly touching shelves. Now we have 3 new versions floating around.

The “What The” KD was a series started last year when LeBron took the MVP title. It combined the limited colorways into one mismatched set. The KD V and Kobe 8 that followed were equally as popular.

This year, the KD 6 What The KD mixes the Liger, N7, Aunt Pearl, Meteorology and more. 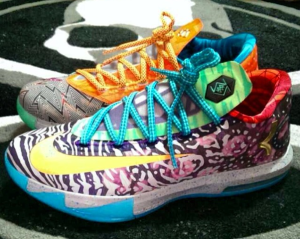 Also floating around in one very popular photo is the KD VI Wanda Pratt. Named after Kevin Durant’s mother it features her initials in a hear logo on the tongue. Green and gold, we’re unsure if this colorway will ever see the light of day. 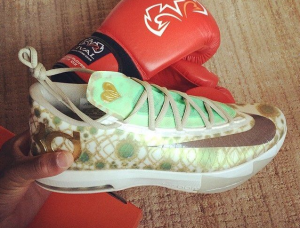 Finally we take a look at the new Vulcanized KD VI series. An NSW casual version of the KD VI with a vulcanized rubber outsole. 2 leaked colorways spotted at a Foot Locker House Of Hoops. One that looks suspiciously close to the KD V Easter released last year. Perhaps a late spring or summer release? 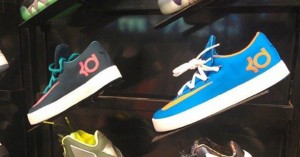 Either way, no official word has come from nike about the new KDs but one thing is for sure. Nike is not done with this silhouette.