**UPDATE** One by one retailers are again delaying the release of the WTL11. With yet another delay, it seems unlikely that we will be copping the What The LeBron 11 anytime soon.

Recently we have been able to confirm a June 14th 2014 early release for the What The LeBron 11 in the UK. Meanwhile rumors still fly about a US release. 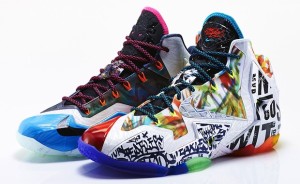 The WTL might be one of the most anticipated launches. Even as this silhouette ages, releases such as the 2K14, South Beach Miami Vice and What The LeBron 11 keep this signature at the top of Must Cop lists.

Originally set to release 5/31 one year after the WTL X, Nike postponed like the WTKD and many recent releases due to labor disputes in China. As of right now, we expect the What The LeBron 11 to release on June 21st, one week after the What The KD release, barring yet another setback. They’ve already released in Australia and sold out in minutes. 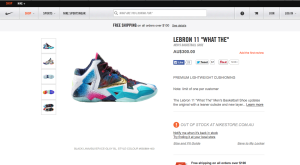 The WTL combines the most popular color ways of the LeBron 11 into two mismatched kicks. Last year they were one of the most limited releases of the year, but this year multiple Nike accounts seem to be stocking the “What The” series. Given the continual buildup of hype and popularity among resellers they will still be a difficult cop. Cop These Kicks will work to bring you as many What The LeBron 11 early links and release info as possible to help you get the drop on the cop.