The Nike LeBron 11 Championship Pack, sometimes referred to aptly as the “Cramp Pack”, was thought to be scrapped after the Heats lost to the Spurs in the Finals. Now it appears that they will release, altho this time not as a pack. 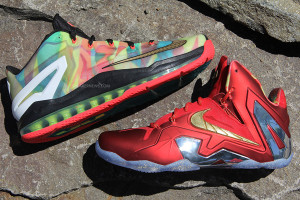 Dubbed the “LeBron 11 Low SE Multi-Color” they will be released at select House Of Hoops retail locations on Monday June 28th. No online release planned as of yet but given this is a last minute quick strike release it is possible Nike will likely release the colorway themselves.

Even tho the Heat did not clench another ring, and given the likely unfavorable reception of another LeBron in “Miami” inspired colors, the hype remains high. You can pick up tickets for this release now for a chance to cop on launch day. Check out the Foot Locker LeBron 11 SE Low Multicolor Blog for more details on picking up a pair.

The LeBron 11 SE Elite is expected to release on 8/1 in the US. In Europe you will have a chance to pick them both up online on 8/9.

We will post more info on this release as we get it.