The next Jordan Future release will be the Multi-Color Quickstrike. 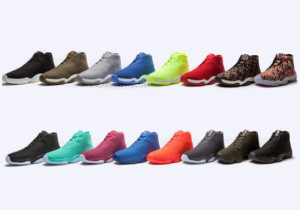 We’ve seen photos of the multitude of impending Jordan Future releases we can expect over the next year. Now we have a confirmed release date for the next Future release. Foot Locker and Foot Action have announced they will cary the Jordan Future Multi Color on April 19th. They will launch alongside their cousin the Retro 11 Low Nightshade.

Foot Action will be raffling their pairs off at Flight 23 at Foot Action and Gotham Plaza Monday 4/14. Foot Locker will release the Jordan Future Multi-Color at 5 locations including Chicago, Los Angeles, Houston and New York. They will be giving out tickets for a chance to cop a pair on Tuesday 4/15 and Wednesday 4/16. KicksUSA will also be releasing limited pairs at select retail locations and will raffle their pairs off Wed 4/16 and Thurs 4/17

Neither retailer will be selling the Jordan Future online, making this an in-store-only release.