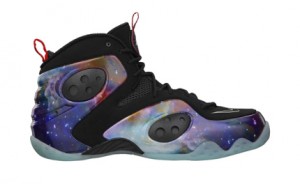 Nike has yet to announce it officially, but latest rumors point to a nike.com only release of the Nike Air Zoom Rookie in the Galaxy colorway on Halloween, October 31st.
Unlike the sole collector version of the Zoom Galaxys these will have black pods, not glow in the dark, and a penny logo on the tongue, not the NASA style logo of the Galaxys.

We’ll let you know the moment anything changes. In the meantime, check out some comparison photos.