Cop These Kicks has always loved our Reeboks, partially because being a kid in the 90’s you absolutely had to own a pair of Pump’s and nothing is stronger than nostalgia. In the couple years or so Reebok has really turned their attention to integrating new technologies with past designs which has bolstered some classics such as the Instapump Fury and Shaqnosis and given birth to new hybrid designs such as the zPump Fusion and Furylite. We had recently called out a deal on the Furylites and Reebok was kind enough to send us a pair to evaluate in person. 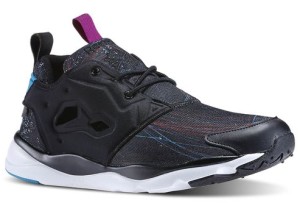 We chose the Jetsetter colorway, partially because it was just understated enough to match almost anything (especially jeans) while catching the eye with flashes of fuchsia and what Reebok dubs “Conrad Blue”. The look was perfect for the lazy-man’s need. They’re easy to slip on and get out the door with whatever you’re rocking today, and that’s exactly what we’ve done with them. Jogers, jeans, fleece, in every color imaginable were donned with these kicks and there was no stand out or clash. We didn’t expect any “What Are Those” moments, but the sneaker culture today doesn’t let you slide. They’re not breaking necks, but they’re still catching eyes. More than a few “I like your kicks” were heard, and disproportionately it was women who noticed them. The aesthetics are there, not the hype. We get it, they’re like Roshes, with attitude. I guess it’d make people curious. 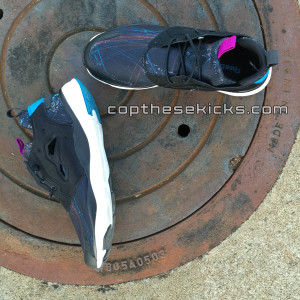 The Feel: “convenience of owning a pair cannot be overstated”

So lets talk about the meat of these kicks. The Furylite is obviously the descendant of the iconic Instapump Fury, but minus the air bladder and hexalite/carbon fiber shank. Honestly they looks similar but are completely different animals. The synthetic mesh upper is undoubtedly light and breathable, however getting used to knit uppers made it feel stiff and rigid. It took some getting used to at first but after a a couple days of wearing them they began to feel very natural. They’re extra roomy, I’d recommend ordering a half size down if you pick one up. The padded sock liner and elastic laces definitely made these work as slip-ons. The convenience of owning a pair cannot be overstated. We found ourselves naturally gravitating to these if running out for an errand or taking a walk,

As usual we put these through the ringer both walking and running. The sole has good arch support thanks to the IMEVA midsole. Reebok describes the experience of walking in these as “light as air” and “cloud like” but in our opinion it’s much more of a natural feel. As an all day walking shoe they absolutely hold up. Partially because they truly are some of the lightest kicks we’ve ever worn. They’re a solid step up from the Adidas Tricot Element Refine which was one of our previous all-day walking kicks. Running however, they simply cannot compare to the zPump or a flyknit free. To be fair, they’re not meant to, but more flexibility and grip is needed for a good solid run.

The price point is solid tho, at $75, as we suspected they more than fit the bill. Being on sale for under $50 they’re an outright steal. Quality concerns did come up when we discovered some glue marks and puckering on the midsole, but again ultimately more than worth their asking price. If you just need a comfy pair of kicks you can throw on with ease, that will look good no matter what you’re wearing the Furylite is just what the doctor ordered.