We’ve suffered thru some hiccups and growing pains in the past with big nike launches. This was something else entirely. The release of the Nike Kobe 9 EM Philippines saw the introduction of a countdown clock. Designed to make purchasing a Twitter Link Only release fair for everyone regardless of bots and Early Links. While the concept was solid, the design lacked something.

The Release lacked the ability to select a pair on desktops. While mobile browsers could select a size for the first 10 minutes, add-to-cart function did not work.

Eventually, altho a bumpy ride, the ultra limited release sold out. Nike announced that was that… no relaunch. Fortunately they did confirm it would not be repeated until the bugs are worked out. 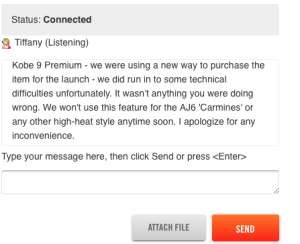 It’s game on for the Carmines, Early Links and Bots are all that separate the satisfied from the salty.