LeBron James has announced that his first signature release with Nike will be returning “soon… very very soon”. The King himself announced via uninterrupted that nike will drop the very first LeBron Retro “Air Zoom Generation” should arrive in “the next day or so… could be a week, but not too far”. 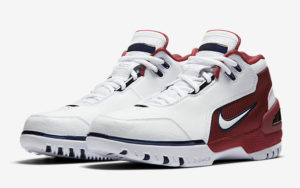 James goes on to say that “It’s Retro season” leaving the door open for more silhouettes to make their way out of the vault and onto shelves.

.@KingJames is bringing the 🔥 with a special announcement. pic.twitter.com/bTwEF41fPG

As the LeBron series progressed with new technologies it also broke new price points. It was the first Nike Basketball signature series to break the $200 mark. Sales of the Nike Basketball line, which include offerings from Kevin Durant, Kyrie Irving, Chris Paul and more have since slumped causing doubt in the viability of the line from Nike’s retail partners. Sales of Lebron James and Kevin Durant signature lines “proved the most challenging” according to Foot Locker. They also hinted that Nike would be working to “reset the price” which may explain the emergence of a retro LeBron series.

When I held these shoes for the first time I couldn’t believe I was holding a Nike sneaker with my name on it AND that they’d forever be known as the “LeBron’s.” Bronny was a baby. V was still in high school. Mom and I were barely out of the Springhill projects. We only dreamed of days like that and then they became reality. This shoe changed my life, my family’s life, and we’ve been lucky enough to change the lives of people around us. This shoe is for EVERY SINGLE person with a dream and a passion. No matter what your situation is. From the projects to the palace, this shoe is a symbol that you can do anything. FIRE IS BAAAAAACK #AZG #StriveForGreatness🚀 #JustAKidFromAkron🙏

Sneakerheads are sure to be happy with this move as older kicks in the series still retain fairly high resale value. These early LeBrons hold a lot of nostalgia for sneakerhead as well. While the Melo 1.5 retro was a failed experiment, the Kobe Prelude and Fade To Black retro packs were highly sought after proving there is a market for revisiting Nike’s prior basketball offerings. If LeBron’s “Retro Season” proves to be a success we may even see a return of earlier KD lines as well.