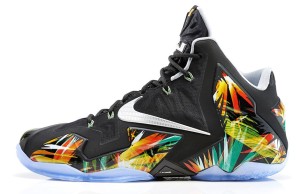 Also known as Black/Metallic Silver-Wolf Grey-Atomic Mint colorway, the Everglades will be a limited release and toward the end of the life for the LeBron 11.

Read the release details at nike and END. Cop them May 17th.