2014 has repeatedly highlighted the Air Jordan Retro 6. The Jordan brand has been celebrating the 23rd year since release the OG retro released in 1991. The latest is the Jordan Retro 6 “History Of Jordan Pack”.

A couple weeks ago pictures of a new colorway for the Air Jordan Retro 6 leaked. Given it’s  colorways similarity to the 2014 World Cup logo, it was dubbed the “world cup”.

Then last week a varsity red colorway popped up on the sneaker heads radar. Due to it’s decorative lining it was named the Retro 6 “Spizike”

As it turns out, like the Champagne and Cigar Championship Pack, this is the newest 2014 Retro 6 Pack. This one is dubbed the “History Of Jordan Pack” 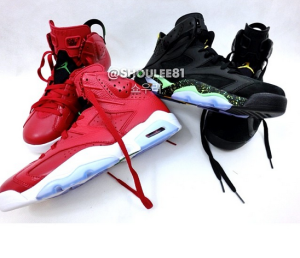 Still no release date set for these colorways, but expect them to carry a premium price tag between $170-195