The Air Jordan Retro ’88 White Cement release details are finally available. The ’88 aka “OG”, “Slam Dunk” or “Twitter” will go on sale online only at 4:51 PM EST today Feb. 6th. This is, to the minute, exactly 25 years after Michael Jordan’s infamous foul line dunk in 1988.

You can pickup the shoes online at footlocker’s website. Super limited release, $200 a pair. These shoes, aptly named ’88 mirror the original release with “Nike Air” appearing on the back, rather than the Jumpman logo. This is the Jordan brands first real “retro” release since 2001 bearing the original logo and design. 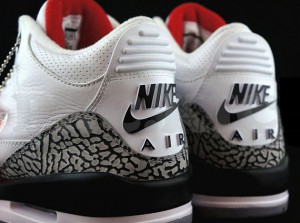 Information for the Retro 3 ’88 was only released via twitter, giving them the nickname “twitter”. Nike.com has released the history and origin story giving on their blog.

The shoe is already live on footlocker.com and has a current countdown. Hopefully this will begin a trend of more “OG” style retros.