Any true “retro” fan wants one thing above all others, OG colorways. The Hare Jordan was one of the original colorways released in 1991 as part of the Warner Bros. Nike collaborations that ultimately lead to the infamous feature film “Space Jam”. The colorway resurfaced in the 2008 in the CDP, but limited runs and high price tags made this a coveted find. Now Hare Jordan returns in 2015 with Bugs Bunny branding retro insert card and Nike Air branding on the insoles. 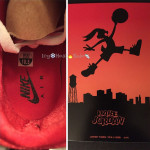 Combined with the 30th anniversary “remastered” materials and craftsmanship, this might be out true first look at an “OG” retro that might bring you back to the days of your youth when Jordans could be saved up for over the summer and purchased at your leisure.

Look for the Air Jordan Retro 7  “Hare Jordan” on May 16th 2015 in a wide release through authorized Nike retailers.