UPDATE Nike has postponed yet another release. Altho Nike left the SB Dunk Stars on their release calendar, they never released them. No announcement was made of the delay until they responded to a tweet

@shoe118912 The release date for those Dunks has been delayed. Stay tuned for updates.

The Dunk Stars are visible at nike.com with a product sold out notification. With no re-release date set it’s anyone’s guess. It seems issues with factory strikes continue to plague Nike releases.

. This all American colorway will be the must have for 4th of July celebrations. A few limited early releases have leaked so far but in extremely limited quantities. 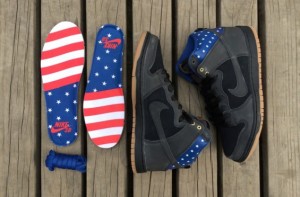 Now you can cop a pair for yourself and be the envy of every sneakerhead at the BBQ.