Nike has been bringing the silver and gold this holiday season.Recently releasing the Liquid Metal Tiempo ’94, Silver Shox and now the Nike Premium Metallic Pack consisting of silver colorways on three silhouettes. 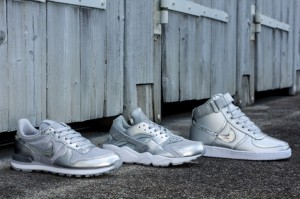 Altho a Air Vandal was created to round out the pack, it has not been released yet on any sites we know of.

No US release date has been announced as of yet, but you can pick up a pair at the links below.