Cyber Monday means deals on most online retailers. It also means new kicks from Nike who never misses an opportunity to release and restock on special dates. Most notable is the release of Jordan Brand’s hyped winter colorway “Legend Blue”. Rumors of finally seeing the long delayed Retro Restock are also flying, making this Monday’s anticipation that much higher.

As always we will add more links as we get them so check back. 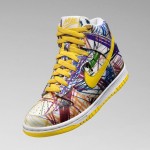