The Nike Air Trainer SC Broken Bats launched in Europe last month. Now it’s time for them to drop in the US. 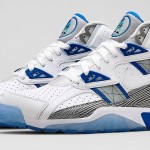 The Broken Bats colorway pays tribute to Bo Jackson’s infamous habit of breaking his bats over his knee after striking out. In a classic Kansas City Royals colorway, this limited silhouette features an 8 bit image of Bo breaking a bat over his knee on the tongue. The words Broken Bats appears under the icy translucent sole.Nike will release the Air Trainer SC Broken Bats on Friday April 25th at 8 AM online.