Tomorrow we get another Spizike release. The Spizike has lost popularity over the last 2 years, partially due to overproduction of colorways. 2015 has toned it down quite a bit with a focus on cleaner classic colorways. Tomorrow the Spizike will get dressed up in a Cool Grey colorway for US and Europe. Being touted as an “Oreo” colorway seems to be riding on the popularity of the flyknits that have been released lately. 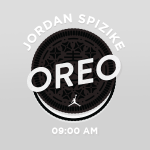