The 2K series has been the clear winner for basketball video games. Each year featuring updated graphics, play options and improved realism. And with improved face scanning, playing NBA 2K17 is about as close to playing in the NBA as you can get. With the 2016 season ending we get to look forward to a new game with new features, and sneakerheads were definitely considered this year. NBA 2K16 featured a Michael Jordan Edition featuring the GOAT himself and Spike Lee. The NBA 2K17 Legends Gold features Kobe Bryant as a proper sendoff to Mamba. 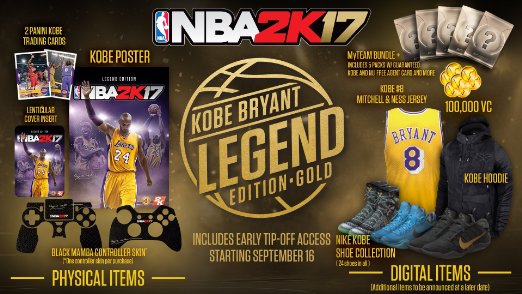 The Legends and Legends Gold edition will include a handful of physical items. You’ll get a  Kobe Bryant skin for your controller, a poster, trading cards. You’ll also get a butt load of VC (virtual currency) used to unlock in game items. But the Legends Gold edition will grant users 24 Kobe signature kicks to wear in the game. A nod to Kobe’s successful career as a player but also as an icon in the sneaker industry.

Even more exciting for some players is the inclusion of Yeezys in this year’s 2K17. Specifics of what models and colorways hasn’t been confirmed yet. As sneaker culture nears the end of it’s pop-culture arc, we see it featured in movies and commercials and video games. Sneakerheads are big money right now and are being catered to everywhere. We live in an age where even virtual sneaker releases are getting hyped.

NBA 2K17 will release September 16th 2016, but those who preorder will get “Early Tip-Off” access 4 days sooner. 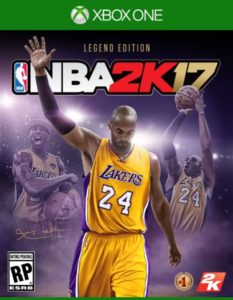 You can get an additional 20% off Preorders by using Amazon. If you want to save 20% but don’t have a Prime Membership, Sign up for a 30 day Amazon Prime trial, order the game, then cancel the membership within 30 days. Preorders aren’t charged until they ship in September. 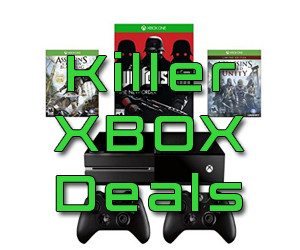