The miAdidas Neely Air | Roland TR-808: Disturb The Peace is a prototype sneaker designed by Neely & Daughters marketing agency that includes a built in Roland TR-808 drum machine. Before the Kanye Stans even ask, yes this is a reference to the instrument used on every track in Kanye West’s 808s & Heartbreak. 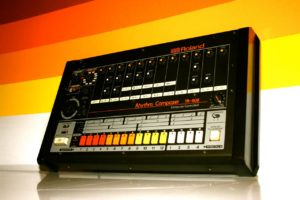 The Roland TR-808 was one of the very first programmable drum machines, released in 1980 and only produced for 3 years before being replaced by the TR-909. The TR-808 was fundamental to the development of early hip hop and was a mainstay in the industry for decades. It’s so popular still that original vintage machines fetch thousands on eBay. 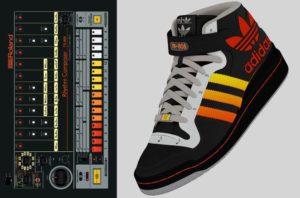 The Roland logo is featured on the heel, “TR-808” is printed on the strap and the entire colorway is inspired by the original TR-808 but the similarities are more than skin deep. The Roland TR-808 isn’t just in the colorway, it’s in the actual shoes. So what better way to pay tribute to the building blocks of Hip Hop culture than putting a working drum machine into a pair of Adidas? This mad scientist experiment has gone terribly right. A tempo knob is visible on the ankle as well as 6 presets (one on each “stripe”) and a play/pause button built into the laces. You can use speakers, bluetooth, usb and wifi built right in to literally create and share beats with your feet. 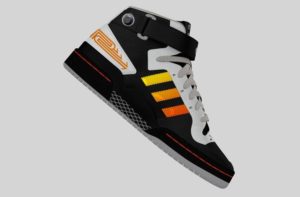 Want one? Too bad. Currently there are no plans to put these sick puppies into full production. It’s a shame too because it’d be damned cool to get your hands on a pair wouldn’t it?