Celebrities like to say stupid things and reporters love to ask celebrities stupid questions. In the end this is a recipe for disaster but also a lucrative click-bait business so it’s here to stay. When Kyrie Irving said he firmly believes the earth is flat it started a fire. Even Draymond Green offered his own colorful observations. But before I get into LeBron’s remarks on his teammate’s apparent lapse of sanity, lets quickly go over what happened. 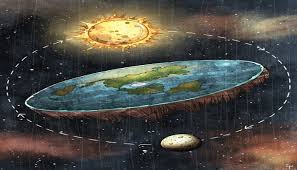 Kyrie Irving believes the earth is flat. Flatter than sales of his Nike signature sneakers (burrrrn). During a podcast released Friday February 17th, he came out of the closet as a common knowledge denier. They’re called “Flat-Earth Truthers” and their ranks consist of national treasures such as clinically insane porn-star Tila Tequila and Nobel Laureate and physics expert… no wait, I’m sorry… Rapper B.o.B. They’ve never been able to see the earth curving so they have proven to themselves that it’s a flat disk, gravity is bunk and the government is to blame.

So Kyrie pulls a Jaden Smith* and starts rambling pseudo-science as an explanation for his belief.

“If you really think about it from the landscape of the way we travel, the way we move, and the fact that — can you really think of us rotating around the sun and all planets aligned, rotating in specific dates, being perpendicular with what’s going on with these planets?”

*Disclaimer – Unlike Kyrie Irving, Jaden Smith’s nonsense is loosely based on the theory of relativity, so credit where credit’s due. Science Bitch.

“They said we’ve got pictures of it being round. But I can take my panoramic camera right now and make this room round. So you can’t tell me a picture makes it round.”

Jesus Draymond, that’s not round. I’m not going to go into the conical lense and FOV basics with you. Just friggin google it.

Uh, Well Mr Green, with two feet on jointed appendages to compensate for uneven surfaces, even tho the slope and grade of a spherical objec…YOU KNOW WHAT NUMB-NUTS? NEVER MIND! Speaking of numb nuts, this guy isn’t exactly a genius so let’s move on.

We can sum up Flat-Earth Truthers in a very simplistic way. “I can’t see it so it’s not real”.

Well I can’t see Wi-Fi or Cellular signals but I know they are there because I can observe their effects, just like gravity. I don’t think Wi-Fi is a conspiracy by NASA to trick us into giving up wires. That would be stupid. No, wireless internet is just as real as gravity… That invisible force which is responsible for celestial particles containing mass settling into a spherical or globe-like shape. You know… Like our planet.

So What does all of this have to do with LeBron James? Well as I pointed out journalists love to ask celebrities stupid things, so when questioned about Kyrie’s views LeBron took the “big brother” stance.

LeBron James: “Kyrie is my little brother… If he decides the earth is flat, that’s ok.” pic.twitter.com/UjiyVGG1uw

This is where I say, No LeBron, thinking that the earth is flat is not OK. I expected more out of you, and I say that with the deepest respect possible. From almost anyone else, a neutral “I love ’em anyway” stance would be acceptable, but LeBron is a champion of truth and equality. He’s a bright, insightful and charitable man by his very nature. Maybe Kyrie can’t do better, but LeBron, King James… I think you can.

While I believe all people are entitled to their opinions, celebrities have a social responsibility to pick and choose their words wisely. They are public figures who represent a brand, city or even country. More importantly they are nothing short of heroes to children everywhere and their words matter. When they hear you questioning the opinion of… well 100% of the scientific community it gives them reason to start valuing their own feelings and perceptions above truth. I know that it’s 2017 and the war on Facts is very real, but where will it end? At what point do your feelings start to matter more than empirical evidence and the scientific method? The very foundations that have vastly improved our lives through technology and medicine are now no more legitimate than childlike pondering?

There’s billions of idiots in the world, and he’s just one

The perversion and demonization of science has been used throughout history to fling progressive civilizations back into the stone age. Lets not forget that 1,600 years before Christopher Columbus got lost and “discovered” the Americas,  Aristotle figured out that the earth was a sphere, simply based on the shadow it cast on the moon. Eratosthenes had calculated the circumference of the earth with astonishing accuracy. Hypatia, a female philosopher, is believed to have developed the solar centric theory that the planets revolve around the sun. She was brutally tortured and murdered during a feud between Christians and Jews in Ancient Alexandria. Centuries later she was branded a “witch” by an Egyptian Bishop. How convenient… So if we knew the earth was round back then, why did it take more than a millennium to prove it? All of her works, and most of those of earths collective scientific and philosophical minds were lost when the Christians, and later Muslims burned the great Alexandria Library. To this day we are still trying to piece together scraps of the scrolls damaged in the destruction.

Kings, cesars, popes and presidents have all declared science the enemy at some point. Their own personal reflections somehow becoming a rallying point for the ignorant and insane. Is it a big deal that Kyrie Irving thinks the earth is flat? No, there’s billions of idiots in the world, and he’s just one. But normalizing that thinking is downright dangerous.

Fun fact… even the Bible described the earth as spherical. So, I guess… you can believe either Kyrie or the Bible. One of them is clearly wrong on this factoid. See, science and religion can get along.