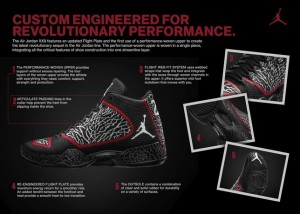 The Black/Red colorway borrows from the Air Jordan 3 elephant print and the Retro 14 heel. Only two colorways were announced in the event.

Release dates and pricing were not included in the unveiling, but given the high price tag of the Jordan XX8 and Kobe 9 we expect this silhouette to push the $250 mark.