Adidas has announced a restock of their most popular line, the Kanye West designed Yeezy 350. The Zebra colorway originally released almost exclusively on the adidas website and the limited drop gave the line a needed hype boost. Here we are 4 months later and adidas is ready to cash in on the hype with a wide release.

With the restock official, the raffles have already started and much earlier than usual. This is due to the general quick strike nature of Yeezy drops. With retailers getting confirmation of stock well ahead of launch they can spend more time pumping up their brand by promoting raffles. It becomes a race to spread the word and gain new followers. It’s easy to get wrapped up in the retail aspect of adidas’s hottest brand, but there’s much more going on here.

The adidas Yeezy 350 V2 Zebra restock will flood the market… and we think that’s good news.

The good news is, you might finally get a pair of Yeezys. Might. With the Yeezy line being one of the only sneakers that still turn a profit, resellers will do their best to control the market, even on a broader release. As we’ve seen recently, resellers will even scoop up GR’s to create a sense of demand. With release numbers nowhere near what the Jordan brand can produce it will still be fairly easy to manipulate the market and squeeze a few hundred bucks out of a Yeezy 350 drop.

For the resellers that were holding onto their Zebras for that extra $50-100, it’s bad news. Much like with the recent release of the Yeezy Powerphase, a wide release drops the resale value through the floor. Overall tho, more people will flourish than fail with a huge release. As a firm believer that our kicks belong on our feet, not stashed in the closet, more people getting Yeezys means more happy sneakerheads. It’s hard to argue against that.

As usual we will post legit online raffles, but none of those scummy garbage sites that require you to spam your friends. They can go straight to hell with their nonsense. Want more followers? Do it the legit way you dirt bags… OK… I’m calm now. 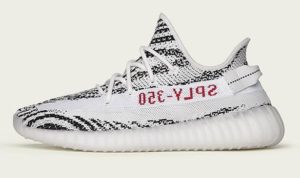