The Air Jordan line has always taken inspiration from the act of flight, both on and off the court. In 1990 it was WWII fighter planes, whose forms and features – especially the shark-mouth nose art – were echoed by the Air Jordan V’s most distinct design lines. The theme was continued on the classic red-and-black flight suits from the same era. The latest Air Jordan V connects both expressions of flight, delivering a stand-out look that’s loaded with history. 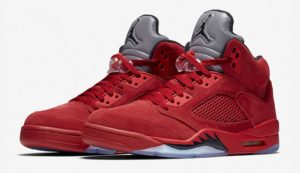